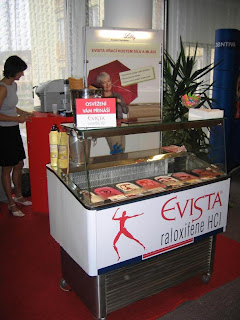 The agency itself has until September to make a decision on Lilly’s pending supplemental FDA. But all signs point to an approval that, whatever else it means, will feel like vindication for Lilly.

Just 18 months ago, the company paid $36 million to settle an investigation into its promotion of Evista. The drug has been approved for use in osteoporosis for a decade. But in 2005 Lilly pled guilty to a criminal misdemeanor charge that it promoted the drug for breast cancer prevention and cardiovascular risk reduction. The conduct involved occurred in 1998; the company simultaneously settled related civil claims dealing with conduct that continued into 2000, but Lilly did not admit guilt.

In addition to paying the fine, Lilly entered into a consent decree prohibiting it from promoting Evista for breast cancer prevention without formal FDA approval.

Not that you would know that from reading Lilly’s press release announcing the advisory committee vote. Underneath a headline announcing the advisory committee vote, Lilly includes what starts out sounding like a disclaimer but ends up sounding like a claim of effectiveness for the new use: “EVISTA is currently indicated for the prevention and treatment of osteoporosis and may provide an important option for postmenopausal women at increased risk for breast cancer.”

Now that sentence is surely unobjectionable on its face. But it definitely counts as bold talk from a company that just signed a court order saying it is “permanently enjoined from directly or indirectly promoting Evista for use in preventing or reducing the risk of breast cancer…unless and until it is authorized to do so by the FDA by the approval of a supplement to the New Drug Application for Evista.”

Especially when you consider that the DoJ investigation included, among other allegations, claims that Lilly promoted the off-label use through its press releases about Evista. (Read the Justice Department’s summary of Lilly’s conduct here.)

Of course, the consent decree includes other provisions, notably one stating that “nothing in this Decree shall be construed to limit or expand the rights of Eli Lilly under the First Amendment of the Constitution.”

When it comes to off-label promotion, that is precisely the question: what are the rights of drug companies like Eli Lilly under the Constitution? Free speech advocates argue that companies have the right to engage in scientific discourse about their products, even if they are talking about uses not approved by FDA. After all, if raloxifene works to prevent breast cancer, millions of women would benefit from knowing that as soon as possible.

Prosecutors see it differently: the FD&C Act prohibits promotion of unapproved uses of drugs, and they have gone after many companies for promoting their drugs beyond the label. There have been several recent settlements (with the Evista case one of the first) in which manufacturers have accepted that premise—explicitly or implicitly—rather than fight the charges in court.

In our next issue, The RPM Report will be taking an in-depth look at the current state of uncertainty in industry after the recent wave of settlements.

As the advisory committee vote indicates, Lilly’s statement that Evista “may be an important option for post-menopausal women at increased risk for breast cancer” is undeniably true. But it was undeniably true a decade ago too. And that didn't keep Lilly out of trouble.

Now, here’s a thought: Johnson & Johnson made headlines recently when it offered a money back guarantee to the UK National Health Service on its cancer therapy Velcade, promising to pay back the government if the therapy doesn’t prove cost effective.

Maybe Eli Lilly & Co. should take a page from that playbook. But instead of offering a refund to the US government, maybe Lilly should ask for its money back from the Department of Justice. Justice.
Posted by Egypt Conflict at 3:11 AM