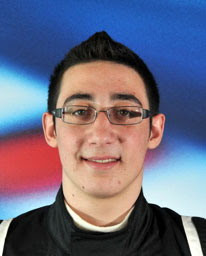 WOODBRIDGE, ON - Continuing their tradition of developing young talent, AIM Autosport is pleased to announce the signing of David Ostella (Canada, right) and Jorge Goncalvez (Venezuela) to compete in the team colors for the 2009 edition of the Star Mazda Series presented by Goodyear. Both drivers are seventeen years old and most recently competed in the Formula BMW Americas series. The move to Star Mazda is a significant step up the ladder in North American motorsport. AIM Autosport has a winning record in the Star Mazda series including securing the 2008 championship for seventeen year old American driver John Edwards.

This will be the second season in open-wheel formula for Ostella after spending previous years racing karts across North America and Europe. The young Canadian had particular success racing in the World Karting Association, Stars of Karting and Sunoco Ron Fellows Karting championships. He drove in various classes that would lead to a career in open-wheel racing such as Junior Intercontinental A (JICA) and 80 cc Shifter. David spent part of the 2007 season racing with the CRG factory team at select events in Europe before attending the Formula BMW licensing course in Valencia, Spain in order to earn his International C racing license. The goal was to enter the Formula BMW Americas series in 2008 and work toward developing his skills. David is now ready to put his skills to the test in the very competitive Star Mazda Series presented by Goodyear.

"I think it's awesome to be signing with AIM Autosport for the 2009 Championship," Ostella said this week. "Last season John Edwards won the championship with the team, and his baseline data will be a great help in making me a better driver this season. I can't wait for the first race in Sebring to come!"

Goncalvez will enter the 2009 season with three seasons of open-wheel experience to his credit. In addition to contesting the Formula BMW Americas series in 2008, the young Venezuelan debuted in a Renault Formula 1600cc in the Panam GP Series (2006) and completed a season in the French Formula Renault Series (2007). He previously raced karts in his home country.
Both drivers tested with the AIM Autosport squad in December in Savannah (Georgia) and January in Sebring (Florida). Goncalvez noted he "was very satisfied with the work developed in the tests gaining the confidence of the members of AIM Autosport. The change of category and major power came very well under the guidance of the team." He has continued training in Venezuela in advance of the first race in a few weeks.

AIM Autosport Star Mazda team manager Keith Willis commented on the addition of the two drivers. "Both David (Ostella) and Jorge (Goncalvez) have shown they have the skills and desire to run a very strong season for us. We took a measured approach to testing over the last few months so that both drivers could get comfortable with the cars, the engineers and the crew. That comfort level is a very important part of the dynamic that makes a successful team." He continued, "We are looking forward to the start of the season and developing both David and Jorge into drivers with the ability to win races make their mark in the racing community."

The Star Mazda Series presented by Goodyear has a long tradition of drivers moving up the motorsport ranks across North America and around the world. The series regularly competes on the under-card at major motor racing events including the Rolex Grand Am Series and American Le Mans. This presents unique opportunities for the drivers to display their talent in front of leading international teams. The series also enjoys television broadcast nationally on SPEED TV.

The first event of the 2009 calendar for the Star Mazda Series presented by Goodyear takes place March 20 in Sebring, Florida.
Posted by Egypt Conflict at 7:10 AM