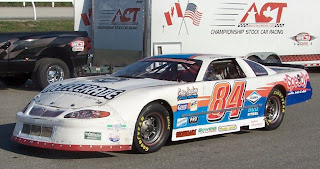 As his #84 Monte Carlo sat in victory lane on the final night of the 2007 season, Kawartha Speedway late model driver Larry Jackson was on top of the world. He had just clinched the division’s track championship and was waiting for his family to join him in the winner’s circle for the celebration. His 7 wins had the rest of the pack chasing the back bumper of his Gary Jackson Trucking/B & B Decals/Speedy Muffler/Montgomery Marketing/Dana Canada/Wix Filters/Strongarm ride throughout the year. Jackson’s 2008 season had its highlights and a second place finish in points would leave most drivers feeling proud, but the acting fire captain with the City of Mississauga is somewhat of a perfectionist and he admits he was disappointed with his performance.

“We might have set the bar a little too high”, admits the Oakville, Ontario runner. “Back-to-back championships would have been great, but I think our 2007 gave everyone else something to shoot for and I think the competition really stepped-up to the plate. I have to congratulate Dan McHattie on a great season and that Watson kid. What can you say about a 15 year-old who runs as well as he does on a regular basis?”

His pair of 2008 wins included a checkered flag in the first event of the summer series between late model drivers at Kawartha and Capital City Speedways. Heading into the final night of the year, Jackson trailed eventual winner McHattie by a slim 2 points. The pair of veteran drivers staged a thrilling side-by-side battle for the entire 10 lap distance of their qualifying event, with Jackson picking-up the win by a slight margin. With his fist punching the air as he crossed the line, the racer – who’ll celebrate his 34th birthday in May – made the battle for the top spot even closer.

“Even though it was only a heat race, that was the most fun I had in the racecar all season”, Jackson says with a smile. “I just kept looking straight ahead and I’m sure Dan was doing the same thing. I knew he was there and he knew I was there. We were both going for the same thing and with Kawartha paying 10 points for a win; I knew if I finished ahead of the #71, we’d be at least tied or I’d leading the points going into the feature”.

Once the 100 lap feature race took to the track, Larry Jackson was off like a house on fire. His #84 Chevy was on rails and he took command of the show early. It seemed he’d be unstoppable and then the unthinkable happened. The blue Monte Carlo slowed and was pushed into the pits. The ignition coil had failed. Jackson had gone over the car with a fine toothed comb just the night before and says the part looked okay, but it relegated him to a 17th place finish and cost him a second consecutive title. With the 2009 campaign just over 2 months away, Jackson admits he’d like to get back to Kawartha – but isn’t sure of his plans for the upcoming season.

“Our car from 2008 was sold at the end of the season”, he says. “Its not something we’d planned on doing – but sometimes you get an offer you can’t refuse. Kawartha is my favourite track and I’d love to put a program together to run there in ’09. As it stands right now, I just don’t know what we’ll be doing”.

Posted by Egypt Conflict at 8:03 AM