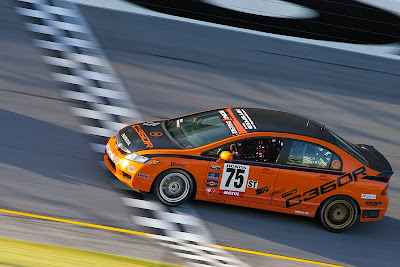 It's been a few weeks since the Grand-Am event at Daytona in late January. The cars have all been stripped down, with their bits-and-pieces shipped off here and there to their respective suppliers to be rebuilt, repaired and improved. Which means we've got three partially-assembled Honda Civic Si's at the shop, amongst a few of our customer cars, and looking at them made me think of the Daytona race, which went quite well for us. We had a strong result, with Matt Pritiko and Travis Walker (in our #76 car) finished on the podium in third, but it could have been ever stronger as Christian Miller and Randy Pobst (in #74) also ran up front until the last couple of laps.
So looking back at Dayona, and having the benefit of the great SPEED TV coverage (which was some of the best racing in both KONI Grand Sport and Street Tuner classes ever to grace a TV screen) to provide added insight, what did we learn?
We learned that old age and treachery are pretty much equal to youthful exuberance. Our driver line-up included two stalwarts of the North American touring car scene, Pobst and Peter Schwartzott. These guys both have amazing history in racing, and were team-mates in the early nineties in Honda Preludes and CRX's. So to see both of them duking it out with our young up-and-coming pilots Travis Walker and Matt Pritiko was really special, especially in the last half-hour of the race when Travis and Randy were battling each other for the top spot, right in the mix with the Cobalts, Subaru and BMW. It was an amazing race to watch, with lap after lap of edge-of-your seat passes.
We learned that Ray and the boys can build a car that is quick and reliable right out of the box. The #76 and #75 Civic Si sedans were brand new cars for the Daytona race. Team Technical Director Ray Lee and our amazing crew started building them after last year's season-ending race at VIR in October. Given that December and January weather here in Toronto is less than ideal for testing race cars on track, the simple fact is that neither sedan had ever turned a wheel, other than spent on the dyno. So to have all of our cars prove to be both quick and reliable with zero test time is a true testament to the amazing team Ray's put together.
We learned that the Civic is a strong platform. There's no question that we've got the best driver line-up in the KONI Street Tuner paddock, and it shouldn't be much of a surprise to see our cars atop the leader board. Come qualifying, we managed an amazing 4th, 5th and 6th, a feat that I don't believe has ever been accomplished before. Even more interesting was that our cars qualified in numerical order (#74 – MIller, #75 – Shwartzott and #76 – Pritiko), which most certainly is a first!
The Civic program is the result of discussions with Honda back at the end of 2007. At that time we were running TSXs (and rather successfully, one might add), but we knew that a new TSX would be released in 2009, and our recommendation was to continue the TSX in SPEED World Challenge and to use the Civic Si in the KONI Sports Car Challenge. This effectively doubled the budget, as Honda would be utilitzing two different cars to cover two series which had previously used the same platform. The new Civic has many similarities to the RSX-S that our team has a great history with (we still support them in Canadian Touring Car), and it's not too surprising that our Civics are equally strong.
We learned that the competition is as fierce as ever and we will need to be at the top of our game every weekend if we want to win races, let alone the championship. KONI's ST class is arguably one of the most competitive series of any touring car series in the world, and we're going to (again) have our work cut out for us if we're to win the championship. Having been second in the Driver's Championship the past two years (for Adam Burrows in 2008 and Billy Johnson and Karl Thomson in 2007), and first in the Manufacturer's crown in 2007 (second in 2008), we are motivated to win. But this isn't going to be a cake-walk!
We learned that the KONI Challenge remains one of the strongest motorsports series anywhere. Despite the economic downturn, our series boasted nearly seventy entries at Daytona. The track can easily handle that number of cars, but the fact that we had almost 70 drivers take the green flag to start the race is nothing short of amazing. Being a part of the NASCAR family certainly helps to open doors, even in a down economy, and our partners and sponsors are seeing real value in the print, on-line and tv coverage that we delivered at Daytona (viewership on both the Rolex and KONI races were up substantially over their record-breaking numbers from last year, by the way).
And so we're looking forward to Homestead, Miami in a few weeks. We're busy working with some of the local Honda clubs to bring their members out for what we hope will be a truly memorable weekend, which Grand-Am is promoting as a "Fan Appreciation Event". At the moment there are 61 cars entered (30 GS and 31 ST), which will make for more great racing!
I wonder what we'll learn then?
Posted by Egypt Conflict at 6:23 AM