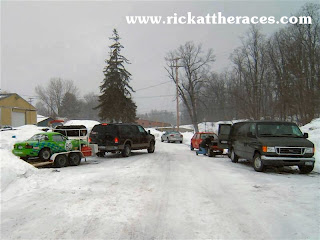 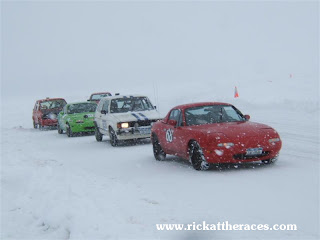 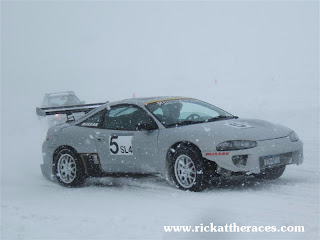 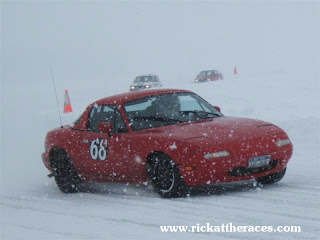 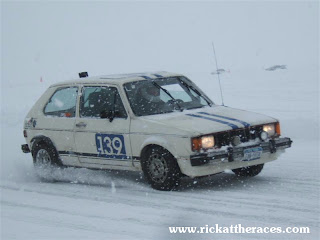 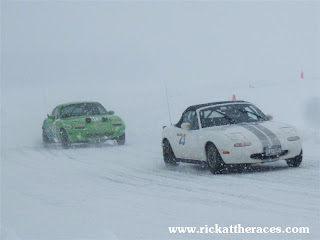 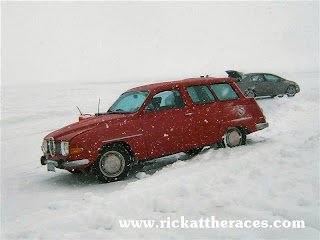 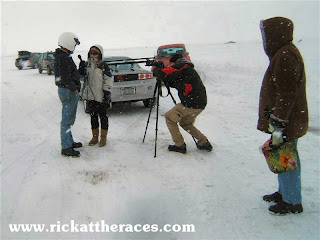 It seams hard to believe that less than two weeks ago I was sitting at the races in my shorts and tee shirt drinking cold beer. Yes, my Florida tour is over and It's now back to the cold reality of a February in the North East. Winter's not over in my area and this past weekend my focus
was back on ice racing.

Some time ago, one of my co-workers mentioned that he'd seen ice racing at Sainte Barb, near Valleyfield in Quebec in past years, but didn't think it still took place. A few days before my Florida trip and during the course of a work day I happened to be in the vacinity of Sainte Barb
and noticed some 'typical' ice racing cars parked in peoples yards on trailers. It got me wondering if something in the area was still taking place. I had nothing planned for Saturday afternoon (21 Feb) , and as it's just a 45 minute drive from my home, I went on a 'research
mission'. Even if there was nothing going on that day, I may find evidence or information for the future.

Well, I drove to the frozen water front and found nothing that looked positive, so decided to stop and ask some questions. This is always a gamble in Quebec, because of the language situation ( Je parle petit peut Francais ! ) but I struck lucky first time, and not only found a
guy that spoke perfect English, but one that was a race fan too. He told me that it's been many years since ice racing took place at Sainte Barb and the cars I'd seen on trailers were most likely ones from nearby Beauharnois ( where I've been a number of times in the past). So my trip
was in vain, but as they say, nothing ventured, nothing gained !

The CNYIRA ( Central New York Ice Racing Association) are never 100% sure where or on what days they will actually be racing until a day or so before it happens. ( Due to ice conditions and driver availability).

A definite decision to race on Saturday (21 Feb) at Bernhards Bay , Constantia on Lake Oneida , New York was made on Friday (20 Feb). On Saturday , I received confirmation that they would race on Sunday (22 Feb) too.

I was out of bed at 5-00am on Sunday and I left Long Sault (Ont) in a snow storm shortly before 6-00am. After a wake up brew 'to go' from Tim Hortons at the Upper Canada Services on the 401 , I was on my way. It was slow going through the storm until I reached Cardinal, where
conditions improved, and by the time I'd got to the border at Thousand Islands the snow had stopped. By 8-30am , I'd had breakfast at Mexico on 1 81 and was continuing for the last few miles of the trip. By now it had started snowing again and I began having doubts if the event would take place. On arrival at Bernhards Bay I found a few hardy competitors
unloading race cars and a plow out on the lake clearing the track. Things looked positive and as I sat in my car awaiting the start a couple of familiar faces pulled up. It was Gordie Killian and Mike Knappenberger, two TRACKCHASING friends from Pennsylvania. They were there, like me to add a new track to their totals. Not long after, the TRACKCHASING husband and wife team of Guy and Pam Smith, also from PA arrived.

There were about a dozen cars in attendance and after ten minutes or so of practice they moved on to the actual races. They were split in to two classes, street and ice tires. I was quite surprised how quick they all were, even the ones with street tires. While on the ice I got chatting
to, a couple of young student journalists from the Syracuse University. One had been doing the filming while the other had been interviewing drivers. They told me they were doing a project on ice racing. After I mentioned to them where I was from and the reason I was there, they somehow decided an interview of 'yours truly' would be a good idea. They were interested in the Track/Race/Chasing hobby and asked about my travels.

This was one of the few ice racing events I've been to that took place while it was actually snowing. I didn't risk taking my good camera on to the ice, opting for my small digital Fugi. You will see from the photos, what the conditions were like, so after seeing a couple of races I was
heading for home. I had a front row seat booked in my living room, for the televised Sprint Cup race from California ! It turned out to be two in a row for Matt Kenseth #17

PIC 1 The ice racers unload their cars at Lake Oneida

PIC 2 to 6 Action from Lake Oneida

Posted by Egypt Conflict at 8:11 AM