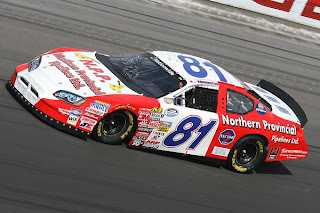 The 2009 race season of the Northern Provincial Pipelines Late Model Series is still two months away. But south of the border, NPP is flying the Alberta and Canadian flag at Las Vegas Motor Speedway.

LAS VEGAS, NV (February 26th) – With the lights of Las Vegas shimmering in the distance, Canada’s DJ Kennington hopes he can deal his way into a top 10 position in the NASCAR Nationwide Series point standings. Las Vegas Motors Speedway is the next stop for the St. Thomas Ontario driver this weekend. Kennington currently sits 12th in points after finishing16th and 24th at the Daytona and California races.

“I think we have come out of the box pretty strong this year,” says the St. Thomas, Ontario driver, “we have had two pretty good runs. I am hoping we can get the No. 81 Dodge in to the top 10 this weekend at Vegas.” Last year, in his first ever visit to Las Vegas Motor Speedway, Kennington finished 29th after qualifying his race car in 34th. “There is still a bit of a learning curve running these big tracks,” adds Kennington, “but we are starting to see results from what we learned last season. We’re heading in the right direction that’s for sure.”

Veteran NASCAR racer Michael Waltrip sits just 6 points ahead of Kennington in the Nationwide Series point standings. Kennington is only 18 points back of being in the top 10. “Last year at this time we were sitting 27th in the standings.” After Las Vegas, Kennington and his Northern Provincial Pipelines Ltd sponsored team and the rest of the Nationwide Series competitors have almost one complete month off after four consecutive weekends of racing.

Posted by Egypt Conflict at 2:05 PM