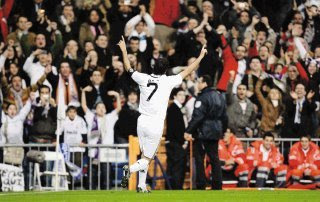 The unexpected defeat of Barcelona on Saturday at Espanyol (1-2) and beating him to Real Madrid Betis (6-1) ingredients were sufficient to restore excitement to the Spanish League, which just a few weeks ago seemed totally defined for Barcelona.

Barca is still the leader, but with income less than five points (the difference is now seven) than two weeks ago regarding the Merengues, who with the help of a enrachado Raul, still dream of seizing the title.

The previous day he left out the points with the Betis match, after losing by two goals to nil.

This new date was a clear factor in numerical inferiority since 38 ', by the expulsion of Keita. This influence came about for two goals from Ivan de la Peña, who shot down the strength of the block Catalan, which was followed 22 days without losing. On the other hand, Espanyol accumulating 14 games without knowing what it was winning.

Also, Espanyol, also in Barcelona, managed to win a local derby after 27 years.

Racha. The victory was the ninth before Betis consecutive victory for Real Madrid since the arrival of Juande Ramos found the technical track. Could not be at a better time in the season.

Betis suggested before a big show, plus a dose of his players thinking about the game against Liverpool this week for the Champions League.

Cutting units makes think about a comeback as magical happened in the 2006-2007 season in which they wrested the scepter Merengues andalusia Barca in recent days.

Posted by Egypt Conflict at 5:23 AM