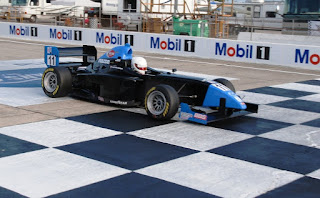 Sebring (March 20, 2009) - A trio of European rookies took the top three spots in this afternoon's Round One of the 2009 Star Mazda Championship presented by Goodyear at the 57th Annual 12 Hours of Sebring. Adam Christodoulou, the rising open-wheel racer from Milton Keynes, England, started from the outside of the front row and drove twenty flawless laps to victory at the wheel of the #11 JDC Motorsports Mazda.

"We struggled through some mechanical problems during the week and even missed a session on Wednesday, which was tough with qualifying on Thursday, but the team did an awesome job and it all came right in the end," said Christodoulou.

"Even though Richard was on the pole, I seemed to get an extremely good start and passed him going into the first corner, but then I looked over and saw Alex Ardoin next to me and he led the first couple of laps until he had a drive through penalty and I got the lead of the race. I'm used to twenty-five minute races in much colder climates, so it felt like a really long event, and Richard actually passed me on one of the final re-starts but went a bit deep into corner ten and I was able to get by and hold the lead for the rest of the race."

Rounding out the top-5 were Brazilian Caio Lara in the #19 JDC Motorsports Mazda and American Joel Miller, who won this event from the pole in 2008. Lara finished third on track, but was penalized a position for a driving infraction, moving him back to fourth and elevating Conor Daly to the top-3.

Other notable drives during the event include Alex Ardoin, who qualified 4th in the #51 JDC Motorsports / Oral & Facial Surgery Center Mazda, but with an aggressive start found himself leading the first three laps. Officials determined the start was perhaps a bit too aggressive and awarded him a 'drive-through' penalty that dropped him to the very back of the 28-car pack. By lap 20, however, the third-year racer from Lafayette, Louisiana worked his way back up to 8th. And Chilean rookie Kevin Toledo, driving for the newly-announced Eliseo THL Motorsports team headed by racing legend Eliseo Salazar, scored a top-10 finish driving the #77 Eliseo THL Mazda.

Peter Dempsey, who won four races during the 2008 Star Mazda Championship, three of them in a row, and finished third in the championship, weathered a difficult weekend with his new team to qualify 5th and finish 6th in the #3 AIM Autosport / Motorsport Ireland / Queyside.ie Mazda. Joe D'Agostino, a last-moment entry driving with sponsorship from Classic Mazda in Orlando, Florida, qualified 11th on the starting grid in his #5 Andersen Racing / Classic Mazda machine and finished 7th. 17 year-old Venezuelan Jorge Goncalvez, moving up from from Formula BMW made a good showing, finishing 9th in the #72 AIM Autosport / Mazda.

In the team championship, JDC Motorsports leads with 32 points, followed by 2008 team champions Andersen Racing with 30 and AIM Autosport, who fielded the championship-winning effort of American John Edwards, in third with 22 points.

Posted by Egypt Conflict at 7:54 AM