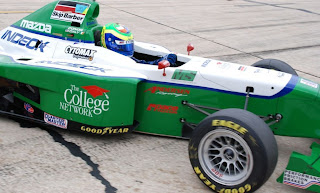 Sebring (March 18, 2009) – Conor Daly, son of racing legend and two-time 12 Hours of Sebring winner Derek Daly took one small step toward tradition today, posting the fastest time in the first official practice session for Round One of the 2009 Star Mazda Championship presented by Goodyear.

"At the beginning of the session, we went out on older tires and the car had a good balance, then we put on new tires and made a bit of an adjustment and it was what I needed," said Daly.  "We still have a few areas to improve, there's a bit of understeer in 17, but we've made huge improvements every session.  For me as a driver, I still have room to improve because the car is still new to me.  It would be great to win here like my dad did, but we still have to keep making improvements and come race time we'll see how well I put together everything I've learned.  Hopefully it's a good result."

Twenty-five of the twenty-eight cars entered for the weekend turned timed laps in the session, with less than a second separating the top-6.  Products Mazda.

There will be one final practice session Thursday morning with qualifying to set the starting grid taking place from 1:45 pm to 2:30 pm Thursday afternoon.  The 45-minute Round One of the 2009 Star Mazda Championship presented by Goodyear season is set to take the green flag at 3:55 pm, Friday, March 20.

Posted by Egypt Conflict at 1:14 PM