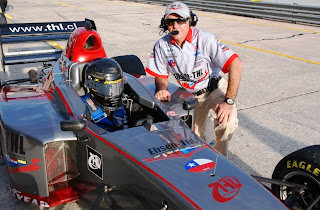 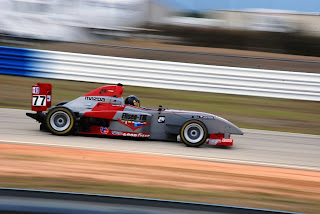 "My dream is to someday drive in Indycar," says Toledo, who just graduated high school after studying engineering at the Quimahue School in Rancagua.  "And to have a legend like Eliseo Salazar, who has raced in F1 as well as the Indy 500, managing my career gives me great confidence that I will achieve my goal.  The Star Mazda Championship is a very competitive, high-profile series that provided a stepping-stone for American driver Scott Speed to move up to F1, so this is where I will race in 2009 to develop my skills."

Eliseo Salazar, the team principal of Eliseo-THL Motorsports, is the only Chilean driver ever to compete in F1 (and the only one ever to score a championship point), making his debut with the March team in 1981.  He drove in 37 Grand Prix before moving to sports car prototypes in the late 1980s racing with both the Jaguar and Ferrari teams.  He returned to open-wheel racing in 1995, signing with Dick Simon to race in the CART Indy Car World Series and scoring a 4th-place finish in his first Indy 500. He won the Las Vegas 500 in 1997 becoming the first Chilean driver to win a major open wheel event.  Eliseo became a regular at the 500 even after the CART/IRL split. He qualified on the front row of the Indy 500 in 1996 and 2000, finishing third in the 2000 Indy 500 driving for legend A.J. Foyt.  Salazar retired from open-wheel racing in 2002 after finishing in the top-5 of the IRL championship two years in a row.

His racing resume also includes the NASCAR Craftsman Truck Series, American Le Mans, and Grand Prix Masters.  He is currently a regular competitor on the international rally scene and recently became the first driver ever to compete in the Grand Prix of Monte Carlo, the 24 hrs of Le Mans, the 24 hrs of Daytona, the Indianapolis 500 and the Rally Dakar.

“My idea for Eliseo-THL is to be a place where young South American drivers can come and not feel intimidated at first, for all the cultural and racing differences, starting with the language barrier," says Salazar.  "I feel that I have, through blood, sweat and tears

(in my case, literally….), learned  the ins and outs of American racing and I can help ease the steep learning curve to succeed here. That’s why our logo incorporates the flags of all the Spanish speaking countries of South America.”

The Eliseo-THL Motorsports team will be headquartered at a facility in Pittsburgh, PA.  Overseeing the operation will be Kari Marciniak, who has been both Salazar's wife and team manager for the past fourteen years.

Other members of the team include Eric Langbien, an engineering consultant with fifteen years of experience.  He relates particularly well to drivers, having been one himself, winning championships in both racing and rallying.  Crew chief Scott Gates was born into an open-wheel racing family and has been working with Langbien for the past ten years.  He has a long history of working with top young drivers and has been a part of the Star Mazda Championship since 1994.

“It has always been our intention to form a team for young South American drivers.  Having teamed up with Luis and Kevin has made our dreams become a reality," says Marciniak.  "We have always enjoyed following the drivers of the Star Mazda program, so it was only natural to have Kevin begin his U.S. career here.”

The Star Mazda Championship presented by Goodyear is now in its 19th year as one of the most prolific, successful and richest open-wheel driver development series in North America.  Star Mazda is a high-speed training ground for future stars of the sport and a major step on the MAZDASPEED Motorsports Development Ladder that reaches all the way from karting to the Atlantic series… and from there to the top levels of auto racing worldwide.

The ‘single-spec’ engineering of Star Mazda Championship race cars showcases driving talent instead of big budgets. Total prizes for 2009 are $1.5 million, including a Mazda-sponsored drive for the Star Mazda series champion in the next step up the motorsports ladder, the Atlantic Championship Powered by Mazda.

The first race of the 2009 Star Mazda Championship season is as a support event for the Mobil1 12 Hours of Sebring, Friday, March 20.

For further information about Eliseo-THL Motorsports, please visit the team's web site at www.Eliseo.com.  For interviews or photos, contact Kari Marciniak at kari@eliseo.com or telephone (412)361-7714 or (412) 638-4974.

Posted by Egypt Conflict at 8:38 AM