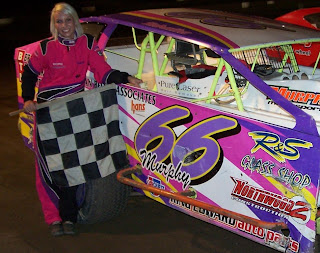 Photo attachments (by Jim Clarke – Clarke Motorsports Communications)
#1).  Tabatha Murphy poses with her DIRTcar sportsman ride during the 2006 season at Brockville.
#2).  The Murphy Motorsports #66 sportsman turns a fast lap at Brockville Speedway.
#3).  The highlight of Tabatha Murphy's 2006 season was picking-up the win in a match race with Jessica Power.  The special exhibition race was arranged by Brockville Speedway fans.

Go ahead, pick a cliché.  Tabatha Murphy defies them all.  The 18 year-old from Prescott, Ontario is an exception to every preconceived notion.  At first glance people might expect the pretty, blonde teen to fit the obvious stereotypes.  She doesn't.  A recent graduate of South Grenville District High School, Murphy is currently enrolled in her first year of the Police Foundation program at Brockville's St. Lawrence College.  Something else people wouldn't know right away is what she does during her spare time.

"I love to play baseball – I've played nearly all my life," she says with a sly smile and a twinkle in her eye.  "But racing has become a huge passion.  It's not something everyone gets to do and people certainly don't expect it of me.  When I tell people about driving the racecar, they always think I'm kidding.  If they don't believe me, I just invite them to come to the track and see for themselves."

2009 will mark Tabatha Murphy's 4th season behind the wheel of a DIRTcar sportsman modified at Brockville Speedway.  While she says her long-term plan is to pursue her obvious career path as a police officer, Murphy says the sport of stock car racing will always be part of her life.  Often seen wandering the pit area with her pug 'Peanut' at her side, the young lady with the heavy right foot says she enjoys the friendships she's made at the track.

"It's fun – we have a great time," says Murphy.  "We got an offer from Dingwall Motorsports a few years ago and it's all grown from there. Obviously, I'd love to win all the time but we're doing it as a hobby and if we weren't having fun, I don't know if we'd be racing at all.  When we first started, I didn't have a clue, but I've gotten better.  Stephane Lafrance (a driver in Brockville's premier division) has helped coach me a lot over the past few years and I've learned so much."

Sponsorship and support from family and friends means so much at every level of motorsports.  Tabatha Murphy is quick to acknowledge the people that keep her #66 car on the track every week.  She says her Dad works on the car day and night getting it ready for action at Brockville.  Sponsorship from King Edward Auto Parts in Prescott is a big help.  Brockville Tractor Trailer Maintenance in Maynard has been part of the team since the beginning.  Some of their employees lend a hand on race nights.  They haul the car to the track and have given the team space in their shop to work on the car.

"We also have a special person who helps-out behind the scenes", says Murphy.  "She likes to be at the track, but likes to stay in the background – out of the spotlight.  We call her the 'magnum lady'.  She a very sweet lady and probably the biggest supporter of everything we do on this team."

Murphy is looking forward to an awesome year at Brockville and might even travel around a little, depending on her schedule and the team's finances.  She says she has noticed her fan base growing year after year and appreciates the level of support she receives.

One thing's for certain – when the green flag waves, there'll be a huge crowd in the stands at Brockville Speedway keeping tabs on Tabatha Murphy.

Posted by Egypt Conflict at 6:11 AM