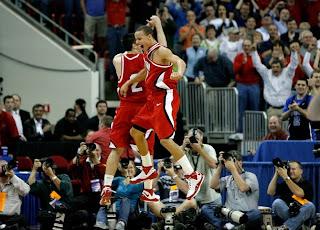 The fans at Rose Garden will be treated to a game between the Western Kentucky Hilltoppers and the Gonzaga Bulldogs when they take their seats on Saturday for the second round of the NCAA Tournament.

Oddsmakers currently have the Bulldogs listed as 10½-point favorites versus the Hilltoppers, while the game's total is sitting at 143½.

Western Kentucky produced a first-round NCAA upset by beating Illinois 76-72 last time out, as 5-point underdogs. That game's combined score made it OVER the posted total of 123.5.

Gonzaga trailed by three points at the half, but roared back to defeat Akron 77-64 in the first round of the NCAA tournament on Thursday night. Gonzaga failed to cover the 14-point spread, but the 141 points made it OVER the night's posted total of 134.

Josh Heytvelt poured in 22 points and grabbed eight boards in that win.

A few trends to consider:
Western Kentucky is 5-0 SU in its last 5 games

Posted by Egypt Conflict at 9:45 PM