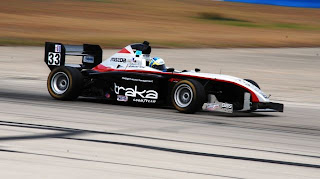 Sebring (March 19, 2009) – Proving that his pace in testing earlier in the week was a true measure of his capabilities, Englishman Richard Kent put the #33 Andersen Racing / Traka / Allied Interior Products Mazda on the pole for tomorrow's Round One of the 2009 Star Mazda Championship presented by Goodyear.  His time of 2:00.286 was well shy of the unofficial track record he set in testing earlier in the week, but still put him well clear of Adam Christodoulou, who will share the front-row for tomorrow's standing start thanks to a lap of 2:00.426 in the #11 JDC Motorsports Mazda.

"It seems to me that the track has gone quite a lot slower; when we go out right after the ALMS alms cars, we seem to lose a lot of grip and I don't know exactly if it’s the rubber on the track or just a coincidence with the heat," says the racer from Milton Keynes, England.  "Whatever, there certainly wasn't as much grip on offer, so we had to use the second set of tires, but its all good; we did what we wanted to do with winning the pole, now we've got to focus on winning the race.  Conditions tomorrow in the late afternoon should actually be a bit better, qualifying was at 1:30 right in the heat of the day, but we set our unofficial track record in the heat earlier in the week, so we've got a fast car for whatever the conditions are and we'll just be ready for whatever comes.  One thing I can tell you, it's going to be a long race."

Kent was the 'mystery driver' who showed up at the final Star Mazda race of the 2008 season at Mazda Raceway Laguna Seca and smashed the track record to win the pole; then wen to win the race.  He remains a 'rookie' in the Star Mazda Championship because series rules apply that classification to any driver who has not yet run three races.  He is a top European racer, with experience in Formula Renault and Palmer Audi.

Joel Miller, who won this event from the pole in 2008, will start from the third spot on the grid after turning a lap of 2:00.680 in the #2 JDC Motorsports Mazda.  Next to him on the second row will be third-year Star Mazda Championship racer Alex Ardoin, who won the season-ending race at Mazda Raceway Laguna Seca in 2007, finished 4th in the championship last year and changed teams prior to the start of this year.  The Louisiana racer turned a lap of 2:00.704 in the #51 JDC Motorsports / Oral & Facial Surgery Center Mazda.  Rounding out the top-5 was the 'Irish Steamroller,' Peter Dempsey, who won four races last season, three of them in a row, and finished third in the championship.  He turned a lap of 2:01.198 in the #3 AIM Autosport / Motorsport Ireland / Queyside.ie Mazda.

Posted by Egypt Conflict at 2:40 PM