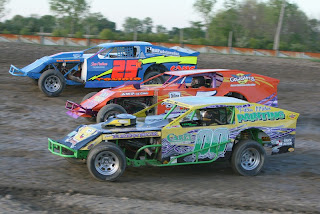 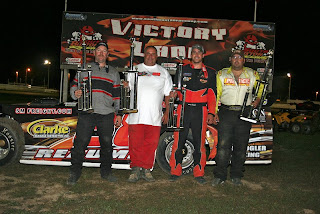 SOUTH BUXTON, Ont. – After a rain-plagued 2008 season, fans and drivers at South Buxton are hoping for nothing but starry- skied nights this summer. And the stars will be shining on the track as South Buxton has scheduled seven special event nights for 2009.

The highlight of the season will be the fifth annual Castrol Canadian UMP Late Model Shootout/Modified Fall Blowout on Saturday, Sept. 26. South Buxton has three new events for 2009, including the Summer Sizzler Series – a home-and-home competition with Ohsweken Speedway (June 19-20 and July 31-August 1).

Drivers will be taking aim at an overall two-night purse in each class along with the nightly payouts at each track. Both Summer Sizzler Series dates follow the World of Outlaw shows at Ohsweken, as they host the Late Models on June 18 and the Sprints on July 28-29.

The Can-Am Clash will serve as a prelude to the second annual UMP Modified Fall Blowout, which was added to the Shootout for the first time last September.

A record crowd of 4,500 watched as Brian Ruhlman, of Clarklake, Mich., won the inaugural UMP Modified Fall Blowout on Sept. 27, while Chris Ross, of Wallaceburg, Ont., became the first Canadian to win the UMP Late Model Shootout. Jon Henry, of Ada, Ohio, ran double-duty and was the runner-up in both the Late Model Shootout and Modified Blowout.

The success and positive feedback from the Modified Fall Blowout enticed South Buxton Raceway owner Scott Mihalco to add the Can-Am Clash to the 2009 schedule.

"Our own (Modified) class is growing, and with the interest expressed by American drivers for an event like this, we're excited about the potential for a big field and a great show for our fans," Mihalco said.

There will be three Sprint Car race nights, with Southern Ontario Sprints in town on May 23 and August 22, while the Michigan-based Sprints On Dirt series visits South Buxton on June 13. Opening Night is Saturday, May 16, with racing every Saturday night through the championship night on Labor Day weekend (Sept. 5).

Andrew Reaume of Blenheim is the two-time defending points and championship race winner in the UMP Late Model class while Louis Clements swept both crowns in the Sport Stock division in 2008.

Leamington's Paul DeGoey is the reigning points champion in the UMP Modifieds but suffered career-ending injuries in a crash during the heat race on championship night. Justin Coulter of Leamington won the championship race.

Nate McNally of Charing Cross will be out to defend his Comp 4 points title, while Rob Quick of Cottam won the season championship race. South Buxton is coming off a wet 2008 season, which saw eight of 18 race dates postponed by rain, including four out of five weeks in the heart of the schedule from mid-June to late July.

Visit www.southbuxtonraceway.com for schedule updates and more information on the 2009 season.

Posted by Egypt Conflict at 2:01 PM