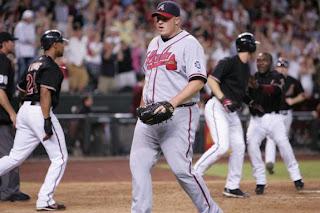 The Atlanta Braves and the Arizona Diamondbacks will both be trying to pick up a win on Sunday when they battle at Chase Field.

Kris Medlen will be the starting pitcher for the Braves on this day. Righthander Medlen is 0-2 this season with a 9.72 ERA.

The Diamondbacks will counter Medlen with Max Scherzer. Righthander Scherzer has a 3.42 ERA to go along with a 2-3 record this season.

Oddsmakers currently have the Diamondbacks listed as 155-moneyline favorites versus the Braves, while the game's total is sitting at 9½.

Eric Byrnes singled in the winning run in the bottom of the 11th inning to give the Diamondbacks a 3-2 victory over the Braves on Saturday, as +100 underdogs. The team's played UNDER the posted over/under (9).

Ryan Roberts doubled in a run and scored once for the Diamondbacks. Tony Pena threw two scoreless innings of relief to post the victory.

Kelly Johnson and Garret Anderson drove one run apiece for the Braves, who were favored at -120. Jeff Bennett allowed the winning run and was saddled with the loss.

A few trends to consider:
The total has gone UNDER in 4 of Atlanta's last 6 games when playing Arizona

Posted by Egypt Conflict at 9:19 AM