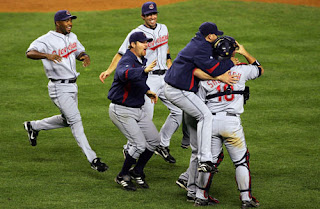 The New York Yankees and the Cleveland Indians will both be gunning for a victory on Saturday when they meet at Progressive Field.

Ace CC Sabathia will be the starting pitcher for the Yankees on this day. Lefthander Sabathia is 4-3 this season with a 3.42 ERA.

It'll be Fausto Carmona toeing the rubber for the Indians in this contest. Righthander Carmona is 2-4 with a 6.42 ERA so far this season.

Oddsmakers currently have the Yankees listed as 175-moneyline favorites versus the Indians, while the game's total is sitting at 9½.

The Yankees scored early as they went on to defeat the Indians 3-1 on Friday, as +110 underdogs. The three runs went UNDER the posted over/under (9).

Derek Jeter had two hits and drove in the other. Andy Pettitte earned his fifth win, and Mariano Rivera netted his 10th save.

Cliff Lee gave up nine hits and three runs over six innings in a losing effort for the Indians, who were -130 favorties in that game.

A few trends to consider:
NY Yankees are 5-1 SU in their last 6 games on the road