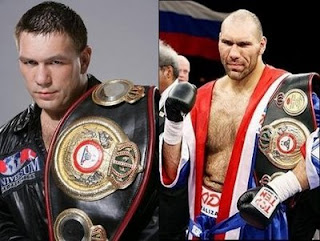 Ruslan Chagaev and Nikolay Valuev will finally get a chance to settle their score this Saturday in Helsinki, Finland. Valuev will be looking for revenge after a disheartening loss to Chagaev in the first meeting but the second meeting may not be much different.

Valuev is a big, powerful giant that can take almost anyone down with one punch but the smaller, quicker Chagaev dodged him for 12 rounds in the first meeting.

One key factor could be Chagaev’s recovery from a torn Achilles, which could obviously slow him down. He has to be a moving target – just like he was the first time – if he wants to earn back his title.

Considering Chagaev is expected to be 100% for this fight, expect the result to be very similar to their first bout. Valuev has an extra foot of height and more power, but Chagaev’s skill and speed will be king.

Andre Berto will square off with Juan Urango this Saturday as South Florida gets to host a meaningful fight for the first time in a while.

While both of these fighters are trying to climb the ranks in a competitive division, they are both at the opposite ends of the spectrum.

Berto is a very skilled, disciplined boxer who is technically sound. On the other hand, Urango is a street fighter, who will look to make this boxing match into a straight brawl.

The good news is that with Urango’s punch first, think second mantra, the fight should be very entertaining. Urango doesn’t dance around much and he’ll me marching straight ahead looking for home run hits the entire way.

The real test for Berto will be to face a guy that is so aggressive. Berto clearly has the skills to outbox Urango, but can he handle the pressure?

The likely answer to that question is yes. Berto will stay disciplined and if Urango gets a little off his game, Berto will take advantage.

Posted by Egypt Conflict at 8:34 PM