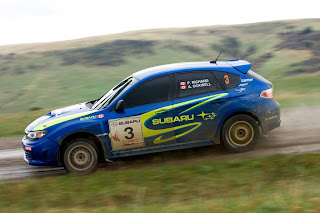 STOUFFVILLE, Ontario (CARS Media) – The Canadian Rally Championship presented by Subaru and supported by Yokohama heads West to Calgary this weekend for the two-day Rocky Mountain Rally. After a four-month break since round one, teams are eager to resume the championship fight.

Antoine L'Estage and Nathalie Richard of St-Jean-sur-Richelieu, Que., lead the championship after winning the season-opening Rallye Perce Neige in February. The pair will be in their new Mitsubishi Evolution X.

"We had a great start to the season,” said L'Estage. “We haven't had a lot of time testing on gravel, but I've won Rocky twice before and I feel really confident.”

L'Estage and Richard will have to fight off defending Canadian Rally Champions Pat Richard of Squamish, B.C., and Alan Ockwell of Toronto. Last year, the pair debuted a new Subaru Impreza STI at the Rocky Mountain Rally and won the event despite brake issues.

"Every event is do-or-die in terms of the championship,” said Richard, who failed to finish the opening rally of the season. “We want to win, but we do need to finish to earn points.”

This event also marks the ten year anniversary of Richard's first rally, when he debuted in a stock Subaru complete with snowboard roof rack! His current factory-backed Subaru will sport a new graphics package for this Rocky Mountain Rally.

Andrew Comrie-Picard of Toronto will be on hand in his Mitsubishi Evolution X, which is still in development. Comrie-Picard is fresh off two strong events in the U.S., and hopes to continue that trend with a strong finish at the Rocky Mountain Rally. “We're going to go as hard as possible,” said Comrie-Picard.

Nick Mathew of Calgary and sister, Kelly Mathew from Caledon, Ont., are coming to Rocky Mountain Rally for the first time as competitors. The pair won the most recent event on the Ontario Performance Rally series and have been working on improving their techniques.

A number of Calgary based teams will be contesting the event, including the two wheel drive entries of Zbigniew Szewczyk and Tomasz Karzynski in their Mitsubishi Lancer, and Eric Grochowski and Leanne Junnila in their VW Golf. Gord Olsen is always a threat for a top finish at this event in his Subaru Impreza STI, and relative newcomers, Hardy Schmidtke and co-driver, Adam Vokes will be aiming to repeat their top five finish from the Rocky Mountain Rally in 2008.

Held May 29-30, 2009, the Rocky Mountain Rally is the first gravel rally in the Canadian Rally Championship and takes place in the mountains that give the event its name. The higher altitude creates special challenges for the crews as engines struggle in the thin air.

Rally car racing is often described simply as “real cars, real roads, real fast.” The all-season motorsport sees drivers and their co-drivers take modified road cars to the limit as they achieve blistering speeds over closed-road courses that typically cover more than 150 kilometres of gravel, dirt or snow-covered roads. Fans can get up close to the cars in the service areas and catch all the action from specially designated spectator points located at the best spots on the route.

The Canadian Rally Championship is comprised of six events held nationwide in a season that extends from February to November. The series is presented by Subaru Canada, supported by Yokohama Tire Canada and features contingency programs from Subaru Canada and Mitsubishi Canada. The Canadian Association of Rallysport (CARS) is the official sanctioning body for rallying in Canada.

Full coverage of the championship will air on RDS and TSN. Check local listings.

Posted by Egypt Conflict at 1:46 PM