Exelixis/Sanofi: The Price of Playing in PI3K 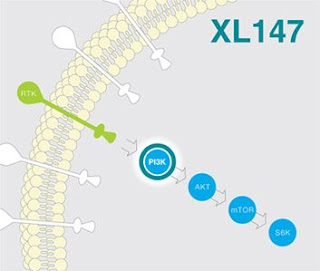 "We want to partner these compounds outright," Morrissey said. "Qualitatively, the interest in the PI3 pathway is today where MET was four or five years ago," he said. "Every major drug maker is trying to work in this space, [but] we're clearly in the lead." See this Pink Sheet DAILY piece about the pipeline review for more.

Today Exelixis cashed in, inking a deal with Sanofi-Aventis for worldwide development and commercialization rights to the two early-stage clinical compounds (both are in Phase Ib/II). In addition the two companies will collaborate on discovery of new, isoform-selective PI3k inhibitors for oncology indications, sharing R&D responsibility through preclinical development, after which Sanofi takes the lead. The companies' press release is here.

Exelixis' development lead in the space translated into a pretty impressive price tag. The biotech gets $140 million up-front plus guaranteed research funding totaling $21 million over three years. The biobucks milestone total exceeds a stratospheric $1 billion, which includes some notoriously difficult commercial hurdles, plus royalties. Still, even just the guaranteed money is massive. Practically mini-bar pricey. In fact (figuring each compound was valued equally) by up-front payment it's on par with the biggest clinical-stage deals so far this year: Novartis' global license to Portola's Phase II cardiovascular candidate elinogrel, signed in February, which included a $75 million up-front payment, and BMS's deal for Zymogenetics interferon lambda, a Phase I biologic that fetched $85 million up-front in January.

Why the flashy price tag? PI3 kinases are important in cell signaling pathways that influence a range of fundamental cellular activities including growth, migration, proliferation and survival. Various PI3k isoforms have been implicated in a variety of cancers as well as cardiovascular, neurodegenerative and immune-inflammatory diseases.

And the space has been hot for some time. Last April, Roche bought PI3k-focused PIramed for $160 million and a potential $15 million earn-out (a solid return for JPMorgan and Merlin, the biotech's two backers who had invested only ₤10 million). Last September GSK essentially made Cellzome its center for kinase drug discovery in a $25 million up-front deal that includes an option on some undisclosed programs (a dual-targeted PI3k-delta/gamma program may be included, though not Cellzome's lead PI3k-gamma inhibitor). And investors in Calistoga Pharma's May 2009 $30 million Series B--Alta, Amgen, Frazier and Three Arch--are certainly betting on PI3k's potential in both oncology and inflammatory diseases like asthma and RA.

As Exelixis' Morrissey noted back in December, the space is crowded with pharma players as well: Novartis, Wyeth and AstraZeneca have ongoing home-grown programs (Novartis and Wyeth in oncology, AZ in thrombosis), for example. BMS accessed some PI3k assets via its acquisition of Adnexus. And in addition to Cellzome and Calistoga a bunch of small biotechs have PI3k projects in the works, including Avila Therapeutics and Semafore Pharma.

For Sanofi the Exelixis deal is just the latest sign that partnering is in the ascendance at the French pharma, a message repeated recently at BIO, and it allows the company to catch up in an important emerging target area where it lacked in-house programs. The move is the Big Pharma's third significant oncology deal in just over a month, building on the purchase of oral fludarabine from Antisoma earlier in May ($65 million) and the structured acquisition in April of BiPar Sciences (up to $500 million).

Exelixis can now boast a cash runway that should last it at least four years (about $238 million as of the end of March, bolstered slightly by an R&D deal with Boehringer Ingelheim signed a few weeks ago). With that cushion (augmented by a line of credit from Deerfield), and having fulfilled yet another dealmaking promise, the company is the modern model of a successful R&D-focused biotech.

UPDATE: this morning's conference call shed a little more light on the companies' discovery collaboration. Each company will contribute multiple preclinical compounds targeting the alpha and beta isosomes of PI3k to a pool of assets. No matter who originated any of the assets chosen to go forward, the companies will share in the the rewards (though Sanofi will foot the development and commercialization bill).

Also: Exelixis' royalty on '147 and '765 will be in the "healthy double digits," according to CEO George Scangos. Royalties on compounds out of the discovery collaboration will vary depending on multiple factors.

Exelixis wouldn't give a firm estimate on their cash runway--above we suggested four years, on the call they were hesitant to go beyond their December commentary, though Scangos noted because of reimbursement from Sanofi "the fraction of our spend covered by partnership revenue goes up. The pressure on our bank account goes down" because of this, but R&D expenses may not plummet because "We're still going to show that spend."

On the general interest in PI3k, Morrissey noted that "the vast majority of pharma companes are very interested in PI3k inhibition," suggesting it would be easier to list the ones that do not have interest than to list the ones that do. Which could eventually mean another PI3k deal for Exelixis, outside of oncology. Non-oncology directed PI3k inhibitor programs in its pipeline remain Exelixis' sole property, outside the scope of the Sanofi deal.

image @ exelixis.com
Posted by Egypt Conflict at 4:00 AM