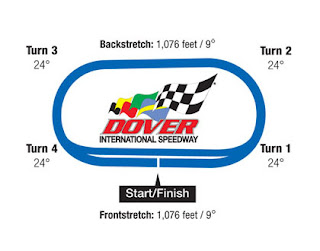 David Reutimann and the rest of the drivers of the Sprint Cup Series will be heading to Dover International Speedway this week for Sunday afternoon's Autism Speaks 400.

Reutimann picked up a surprising win in the Coca-Cola 600 at Lowe's Motor Speedway on Monday afternoon, earning the victory after a rain delay shortened the event to just 227 laps. It was Reutimann's first career Cup win.

Denny Hamlin was 11th at Lowe's, while Jimmie Johnson was 13th, Jeff Gordon was 14th, Tony Stewart was 19th, and Dale Earnhardt Jr. finished well back in 40th place.

Reutimann's win at Lowe's moved him into 13th place in the driver standings, six points back of 12th-place Mark Martin. Gordon holds a 44-point lead on Stewart at the top of the standings this week, with Kurt Busch 115 points behind the leader after 12 races.

Gambling Advisor blog pick Kyle Busch who won the spring Dover race last season, while Greg Biffle took the checkered flag in the Camping World RV 400 at Dover last September. Gordon and Martin both have four career Cup wins on the track, while Johnson and Ryan Newman have three apiece.

After racing at Dover the drivers of the Sprint Cup Series will move on to Pocono Raceway for the Pocono 500 on June 7. The rest of the June calendar then features events at Michigan, Sonoma, and Loudon.

Posted by Egypt Conflict at 5:40 PM