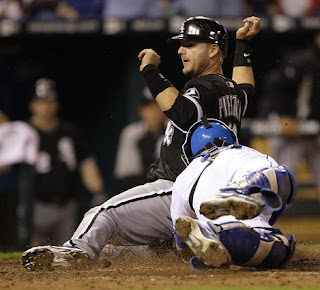 Divisional bragging rights will be on the line on Sunday when the Chicago White Sox and the Kansas City Royals meet at Kauffman Stadium.

The White Sox will give the ball to starter John Danks in this one. Lefthander Danks is 4-3 this season with a 4.59 ERA.

Danks's opponent in this one will be Zach Greinke. The Royals righthander has a 0.84 ERA to go along with a 8-1 record this season.

Oddsmakers currently have the Royals listed as 175-moneyline favorites versus the White Sox, while the game's total is sitting at 7½.

The White Sox scored twice in the top of the ninth inning on Saturday to give them a 5-3 win over the Royals, as a -110 pick'em. The team's played UNDER the night's posted over/under (8.5).

Jim Thome led the White Sox with two RBIs, while Alexei Ramirez had three hits and one RBI. Scott Linebrink got the win in relief, and Bobby Jenks closed out the game with his 11th save.

Mitch Maier drove in two runs for the Royals, while Miguel Olivo went deep. Juan Cruz gave up two runs in relief and suffered the loss.

Posted by Egypt Conflict at 7:54 AM