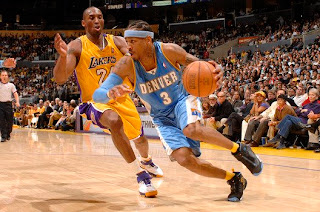 The Los Angeles Lakers and the Denver Nuggets will both be trying to pick up a win on Friday when they battle at Pepsi Center in Game 6 of the Western Conference Finals.

Gambling Advisor blog pick : Oddsmakers currently have the Nuggets listed as 5½-point favorites versus the Lakers, while the game's total is sitting at 209.

The Lakers dominated the fourth quarter and came away with a 103-94 victory over the Nuggets in Game 5 on Wednesday to go up 3-2 in the series.

The Lakers covered the 6-point spread, while the 197 points fell UNDER the posted total of 209.5.

Lamar Odom netted a double-double with 19 points and 14 rebounds for Los Angeles. Kobe Bryant poured in 22 points in that win.

Carmelo Anthony dropped 31 points with four rebounds and four assists in the loss for the Nuggets.

A few trends to consider:
The total has gone UNDER in 8 of the LA Lakers last 9 games

Posted by Egypt Conflict at 4:28 PM