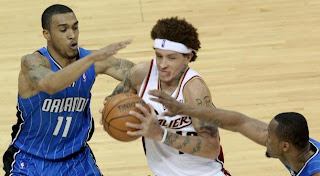 The Orlando Magic and the Cleveland Cavaliers will both be gunning for a victory on Thursday when they meet at Quicken Loans Arena in the fifth game of the Eastern Conference Finals.

Gambling Advisor blog picks : Oddsmakers currently have the Cavaliers listed as 7½-point favorites versus the Magic, while the game's total is sitting at 190½.

The Magic took a commanding 3-1 lead in the series with a 116-114 overtime victory over the Cavaliers on Tuesday night in Game 4.

The Magic won that game as a slight 1.5-point underdog, while the combined score sailed OVER the posted total of 188.

Dwight Howard led the Magic with 27 points and 14 rebounds, while Rafer Alston added 26 points in the win.

LeBron James netted a game-high 44 points and grabbed 12 rebounds for a double-double in the loss.

A few trends to consider:
Orlando is 5-0 ATS in its last 5 games when playing Cleveland

Posted by Egypt Conflict at 3:54 PM