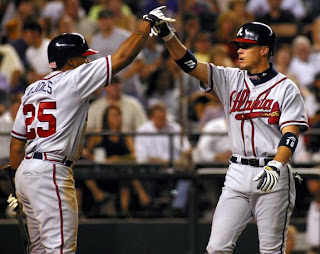 The Atlanta Braves and the Arizona Diamondbacks will both be gunning for a victory on Thursday when they meet at Chase Field.

Ace Derek Lowe will be the starting pitcher for the Braves on this day. Righthander Lowe is 6-2 this season with a 3.45 ERA.

Lowe's opponent in this one will be Dan Haren. The Diamondbacks righthander has a 2.57 ERA to go along with a 3-4 record this season.

Oddsmakers currently have the Diamondbacks listed as 125-moneyline favorites versus the Braves, while the game's total is sitting at 8.

The Braves were doubled 6-3 by the Giants last time out, as a -110 pick'em. That game's nine runs made it OVER the posted over/under (8).

Garret Anderson had two RBIs to lead the Braves, while Kenshin Kawakami gave up nine hits and four runs over 5 2-3 innings.

Adrian Gonzalez hit his 18th home run of the season on Wednesday as the Padres surged to an 8-5 win over the Diamondbacks.

Justin Upton tripled and picked up a pair of RBI in a losing cause for Arizona. Gerardo Parra contributed two hits and two RBI, and Stephen Drew also drove in a run.

A few trends to consider:
The total has gone OVER in 4 of Atlanta's last 5 games when playing on the road against Arizona

Posted by Egypt Conflict at 4:10 PM