Barcelona Reached his Third Title of the Champions League 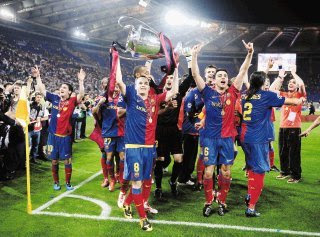 Barcelona on Wednesday completed an historic Treble of titles by winning the final of the Champions League with a 2-0 victory over Manchester United.

In the Olympic Stadium in Rome, won his third Barsa scepter Europe (1992, 2006, 2009) in the first season of the brilliant technical Pep Guardiola, who remained true to its style and attacked with everything at United.

When I came out as a champion player, was just very young and it was ecstasy, Guardiola said when recalling the 1992 consecration in Wembley Stadium before the Sampdoria of Italy. The triplet at the first attempt is a marvel.

The British left to the chance to be the first team to repeat the title of Europe since the tournament adopted the format of the Champions League.

Etoo's goal came after 10 minutes in United's best moment. The Cameroonian striker by picking the right banda, received a pass from Andres Iniesta, cut and hooked with Nemanja Vidic and then finish off the first pole tip.

Until that time, Alex Ferguson had the best opportunities, pushing the ball out from the front line.

Messi, the top scorer in the Champions League with nine entries, sealed the outcome at 70 to the second with a header after a perfect center pole from Xavi Hernandez.

Has long been waiting for this title, said the French striker Thierry Henry, who played with the Arsenal team that lost the 2006 final against Barsa. The last five minutes were the longest of my life.

Won the best team, Ferguson said. We expected something better, but we must give credit to Barcelona. If you hold, then you are much more complicated it.

The duel began with the United generating clear scoring opportunities.

Within two minutes, the Catalan goalkeeper Victor Valdes made a strong rebound in the free-kick by Cristiano Ronaldo and Ji-Sung Park was almost embocadas ball.

The Portuguese star far from finished five minutes later and the ball went near the arch, and just before the goal of Barsa, Cristiano chest down a ball on the edge of the area and cross-kicked to the second left-handed stick.

The target of the actions reassured Etoo Barcelona and took full possession of the ball, reaching tens of hilar consecutive passes in some stretches of the match.

We started the match brilliantly. We had confidence and could be at the forefront, said Ferguson. Do not play to our best level, but they are a good team ... Xavi and Iniesta can keep the ball all the time. We did (the game) very difficult.

Messi is not strongly influenced by the attack of Barcelona in the first half, but his mere presence behind the lack of English. The Argentine and Henry exchanged their positions by now common in the stadium, with Messi pulled the French left and the banda on the far right.

John OSHE a free kick that went high and deflected a shot by Cristiano were the only opportunities that the rest of the United created the first time while a shot from Messi to 19 minutes caressed the crossbar.

Xavi started to tremble with United a free kick that grazed the 27 angle.

Iniesta and Xavi, the brains of Bluered midfield, controlled the game at will and at times despaired to United that he could not grab the ball.

Argentine Carlos Tevez, possibly contested his last game with the jersey of the Red Devils entered the second half by Brazilian Anderson, but his presence was not affected.

Henry waste a golden chance at 48 when he ran for the left wing with a pass filtering Xavi, left spread to Rio Ferdinand and goalkeeper Edwin van der Sar will tackle the ball when he tried to stick it down softly to second.

The attacking continued Barsa on the plug, with a poisoned serving balls Xavi Messi and Etoo.

A free kick from a Xavi burst stick to 53, while the United barely enough to contain the attacks of his opponent.

Valdés tackled him a shot to the foot of the 72 Christian, and from that time the Portuguese were far removed from the stadium.

Posted by Egypt Conflict at 4:01 PM