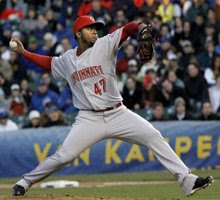 The Cincinnati Reds and the Milwaukee Brewers will meet on the field at Miller Park on Sunday in a battle of division rivals.

The Reds will pin their hopes on the pitching of righthander Micah Owings in this game. Owings has a 3-4 record and a 5.19 ERA this season.

Owings's opponent in this one will be Yovani Gallardo. The Brewers ace righthander has a 3.32 ERA to go along with a 4-2 record this season.

Oddsmakers currently have the Brewers listed as 200-moneyline favorites versus the Reds, while the game's total is sitting at 8.

The Brewers defeated the Reds for the second straight night with a 9-5 victory on Saturday, as -135 favorites. The game's 14 runs sailed OVER the posted over/under (8).

Prince Fielder went 3-for-4 at the plate, including a three-run dinger for the Brewers. Seth McClung threw three scoreless innings of relief and earned the win.

Jerry Hairston Jr. belted a two-run homer for the Reds, who were +115 underdogs in that contest. Aaron Harang gave up 12 hits and eight runs over 4 1-3 innings in the loss.

A few trends to consider:
The total has gone OVER in 4 of Cincinnati's last 5 games when playing Milwaukee

Cincinnati is 4-2 SU in its last 6 games

Posted by Egypt Conflict at 7:28 AM