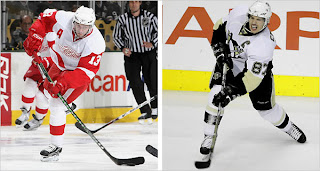 The fans at Joe Louis Arena will be treated to a game between the Pittsburgh Penguins and the Detroit Red Wings when they take their seats on Saturday for the opening game of the Stanley Cup final.

Oddsmakers currently have the Red Wings listed as 150-moneyline favorites versus the Penguins, while the game's total is sitting at 5½.

The Penguins defeated the Hurricanes 4-1 on Tuesday night for a clean sweep of the best-of-seven Eastern Conference final.

The Penguins won that game as -140 favorites, while the five goals fell UNDER the posted over/under (5.5).

Ruslan Fedotenko, Max Talbot, Bill Guerin, and Craig Adams scored for the Penguins in that victory. Marc-Andre Fleury stopped 30 shots on the night.

The Red Wings defeated the Blackhawks 2-1 in OT in Game 5 of the Western Conference final last time out, as -270 favorites.

The teams played UNDER the posted over/under (5.5).

Darren Helm scored the winner at 3:58 of overtime in that win, and Dan Cleary added his eighth of the playoffs.

Chris Osgood was named the game's first star after posting a 30-save performance in the series clincher.

A few trends to consider:
Pittsburgh is 5-0 SU in its last 5 games