Atletico Madrid Takes the Last Ticket for the 'Champions' 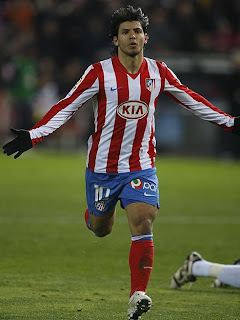 Atletico Madrid won the last ticket was at stake for the next 'Champions' to defeat this Saturday to Almeria 3-0 in the 38th day, which closes the Spanish football league, which helped him secure the fourth because of the championship.

In this way, all rojiblanco, who won with goals from Argentine Sergio 'Kun' Agüero, Raúl García, the Uruguayan Diego Forlan, finished with 67 points behind champions Barcelona (87), who tied this Saturday at the Sports ground La Coruña (1-1), Real Madrid and Sevilla, who play on Sunday.

Barcelona, Real Madrid and Seville were classified directly to the group stage of the Champions League, while Atletico Madrid will have to contest a tie after the European competition.

Villarreal, which finished fifth (65) this Saturday after winning in Mallorca (3-2), and Valencia, sixth (62), which won 2-0 at Athletic Bilbao, Europe vie for the League, the new name will to the UEFA Cup from next season.

Third place for the League is to Europe itself Athletic, despite finishing at the bottom of the table has won the ticket as a finalist in the Copa del Rey, which lost 4-1 to Barcelona, because Catalans played the Champions League.

Atletico Madrid confirmed its fourth place thanks to Agüero, Forlan and Raul Garcia. The Argentine opened the account with a golazo in the 19th minute, which made two cuts to his compatriot Hernan Pellerano and beat up by the Brazilian Diego Alves to the left-handed.

The second is whether Raul Garcia scored in the 27 to a heading from the left by Argentine Maxi Rodriguez.

Forlán has increased at 49 making his 32nd goal this season, which secured the trophy for leading scorer of the Spanish league, ahead of Cameroon Samuel Eto'o (30), scored both of the tie against Deportivo in the 89, and David Villa (28), who scored a double in Saturday's victory against Athletic.

Barcelona, after the celebrations on Wednesday after winning the Champions League in a year that has won a historic triple, tied with a team full of substitutes to the Deportivo La Coruña (1-1), thanks to both Eto'o in the last breath.

With this tie, the whole Galician consolidated seventh place, four points of Valencia.

The Club was scored both by the Equatorial Guinean Rodolfo Bodipo, heading to a center of Mexican Jose Andres Guardado in 31 minutes.

Villarreal, which was probably the last match of their Chilean coach Manuel Pellegrini, who is placed at Real Madrid, dismissed the season with a 3-2 victory in Majorca, thanks to goals from Ruben Garcia 'Cani' (28) and a doublet Joseba Llorente (40 and 52).

Osasuna (18th) will seek to remain the elite of Spanish football, who have already left and mathematically Numancia Recreativo Huelva. If her party wins at home to Real Madrid, Navarre will in the first category.

Posted by Egypt Conflict at 7:40 AM