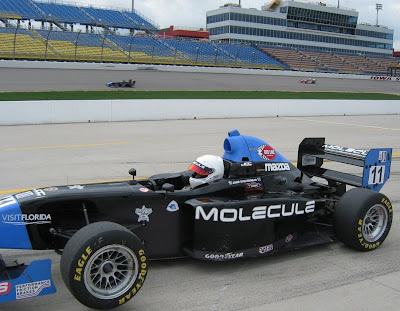 Iowa Speedway (May 28, 2009) – The second day of a two-day Star Mazda Championship presented by Goodyear test at Iowa Speedway was run under ideal conditions, with 14 drivers turning a total of 4,628 laps around the 7/8ths-mile oval.
Widely experienced in road racing in both Europe and the U.S., but with no previous experience of any kind on an oval, current championship leader Englishman Adam Christodoulou redefined his comfort zone and turned the fastest lap of the day -- and the test -- a 22.059 (145.900 mph) in his #11 JDC Motorsports / Molecule Mazda. The best time on day one was set by Louisiana racer Alex Ardoin with a 22.109 (145.589 mph) in his #51 JDC Motorsports / Oral & Facial Surgery Center / Twister Trailer Mazda. Billy Goshen ran the most laps of the day, 258, in his #82 Goshen Motorsports / Baker Commodities / GPSTrackit / OTTO / First Quality Concrete Mazda, setting a 9th-fast time of 22.269.
By the time the final lap was run, all 14 cars in the test were within 7/10ths of a second of each other, setting the stage for an evening of extremely competitive, side-by-side racing when the full Star Mazda Championship field takes to the track for 100 laps under the lights at the upcoming Pizza Ranch 100 on July 10.
"It's taken four days to get to the stage we're at; the first three days on an oval (including the Milwaukee test last week) we ended up struggling with the car quite a bit, but we've been chipping away at it," says Christodoulou, the 2008 U.K. Formula Renault champion who is currently leading the 2009 Star Mazda championship points battle with two wins (Sebring and Miller Motorsports Park) and two poles (Miller and Virginia International Raceway). "I didn't realize quite how hard it was going to be just going around in circles. I can't believe how close the racing is, how high the standard of oval racing is – it's been quite a surprise, but I've been working with my team, JDC Motorsports and its all working pretty well now. When you watch oval racing from the grandstands, it looks like they're going around and obviously they're getting a tow and slipstreaming and overtaking each other; but when you're actually in the seat, I reckon the scariest moments are when you come out of the pits because the first lap you've got to have faith in the car to know that it's going to stick to the ground and obviously around Iowa its touch-and-go flat-out all the way around, but with a wall five meters on either side of you there's not much room for error. Luckily I managed to keep it off the wall for the four days, but it takes a lot of getting used to; you have to start out with a bit of understeer in the car -- the last thing you want on an oval is oversteer -- so you have to start with understeer and build it up lap by lap. I reckon it was about my 30th lap when I got used to the track and realizing how wide and fast it was."

Although the Star Mazda Championship has raced on ovals previously, including Pikes Peak and the Milwaukee Mile, this will be the first visit to the 7/8ths mile Iowa Speedway Oval by the rotary-powered, 250-horsepower Star Mazda Championship cars. By way of comparison, the fastest lap by a V-8-powered, 420 horsepower Indy Lights car at this track last year was 20.0971 sec. Michael McDowell (the 2004 Star Mazda series champion), raced to a 2nd-place finish in the 2007 ARCA RE/MAX Prairie Meadows 250 after qualifying 7th with a lap of 23.999-sec. in his No. 2 Z-Line Designs / Mission Residential / Beck Dodge. McDowell, who graduated from Star Mazda to Indy Cars and prototype sports cars before moving to stock cars, went on to race NASCAR Sprint Cup in 2008 and is currently driving the #47 in the NASCAR Nationwide Series.
The Star Mazda Championship presented by Goodyear is scheduled to make its first appearance at the Iowa Speedway in the Pizza Ranch 100 on July 10. The format will feature 100 laps of flat-out racing under the lights during an ARCA RE/MAX weekend, with the green flag scheduled to wave at 8:30 pm.
The Star Mazda Championship presented by Goodyear is now in its 19th year as one of the most successful open-wheel driver development series in North America. The Star Mazda Championship the college basketball, the triple-A baseball of auto racing, a high-speed training ground for future stars of the sport and a major step on the MAZDASPEED Motorsports Development Ladder and automaker-supported scholarship program that provides funding for young champions to move up to the next level of racing. Graduates of the Star Mazda Championship included three drivers in last weekend's Indy 500 field; Marco Andretti, Graham Rahal and Raphael Matos, as well as seven of 21 drivers in the Indy Lights series.
Iowa testing photo courtesy of Ryan at Junior Open Wheel Talent
Posted by Egypt Conflict at 12:43 PM