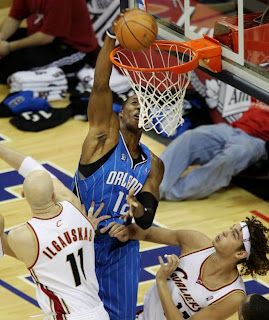 The Cleveland Cavaliers and the Orlando Magic will both be trying to pick up a win on Saturday when they battle at Amway Arena in the sixth game of the Eastern Conference Finals.

Oddsmakers currently have the Magic listed as 2-point favorites versus the Cavaliers, while the game's total is sitting at 192½.

LeBron James poured in a game-high 37 points in a triple-double performance to propel the Cavaliers to a 112-102 victory over the Magic on Thursday and cut the series deficit to 3-2.

The Cavaliers covered the 7.5-point spread, while the 214 points sailed OVER the posted total of 197.

James finshed with 14 rebounds and 12 assists in that win. Mo Williams chipped in with 24 points.

Hedo Turkoglu led the Magic with 29 points, and Dwight Howard had a double-double with 24 points and 10 rebounds.

A few trends to consider:
The total has gone UNDER in 5 of Cleveland's last 6 games on the road