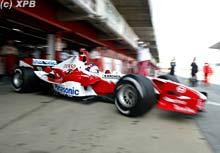 Formula 1 journalist Peter Windsor always wanted to be a Grand Prix driver, so when Toyota offered him the chance to fulfil a life-long ambition, there was no hesitation.

I gently begin to release the clutch. Nothing... nothing... yes, now! I feel the car begin to edge forwards. I keep up the rate of release. It picks up a little pace, and I turn the wheel, feeling cramped in the cockpit and worried that I won't be able to get enough lock. Now my arms are crossed and I'm still holding the clutch. We're up and running, though, so I follow Jörg's signals. The front wing clears the concrete wall. I am in the pitlane!

And then I am heading towards a green light, and starting to press my right foot on the accelerator. I feel a kick in the back as the Toyota jerks forwards. First, second, third – already the car is jumping around from bump to bump, and the first corner is looming. I press lightly on the brakes – and then firmer, hoping suddenly to feel them bite. Nothing. They feel soft and spongy. They are, of course, as cold as ice.

I tiptoe round that opening lap. Spots of rain hit my visor. I accelerate and brake, accelerate and brake, trying to warm things up. Still there is nothing from the brakes. I know I should by now be travelling perhaps 150km/h (93mph) faster everywhere, and that by now the brakes should be alive, but at my tentative pace, the carbon discs and pads have no chance.

The last corner – a tight right-hander – looms in the distance. I am not quite straight from the previous left-hander, but I give the Toyota some power, hoping to warm up the rear Michelins.

I spin like a top. No warning, no teasing. Nothing. I am spinning on my own axis, out into the run-off area. I hit the brakes, and remember to declutch. I select first, then the neutral button. First again. Ease out the clutch. Thankfully, I am away.

I spin again a lap later – this time as I try to squeeze on the power out of the last corner. Everything is cold. I return to the garage.

Mechanics rush around, jacking up the car and firing the wheelnut guns. "Okay Peter," says the welcoming voice of Gianvito. "We are not getting any temperatures. We will put on intermediates. It is starting to rain lightly. Try to hit the brakes on the straight while you've got power on to give them some more heat."

I am feeling a little unsettled. Two spins in two laps. It is raining and it is cold. I am cold. The car is cold. Should I carry on? Perhaps I should stop…

"Okay, ready," says Gianvito. "Try to get some temperature. Let's go." The tone in his voice saves me from having to make a decision. Before I know it, the boys are lowering the car to the ground. Jörg's finger is up, and the engine is again rasping into life. I try to concentrate.

I brake quite aggressively into turn one, and this time the Toyota seems to like it. Things feel more taut, more solid. I squeeze the throttle on exit, and the Toyota jumps forwards, jerking my neck backwards. Down the back straight I accelerate hard up through the gears. Second, third, fourth, fifth; the world is jumping around in front of me. I can feel my helmet lifting slightly.

My legs feel as if they are moving around in the cockpit. It seems hard even to keep my right foot on the throttle. The car is bumping, jumping, buffeting. I brake and change down to fourth for the quick right- hander. The Toyota noses in, but then suddenly I am running wide, over the rumble strip. I back off, nurse the car into the concrete run-off area and rejoin. Still no tyre temperature!

After that, I just kept my head down and concentrated – harder, I think, than I have ever done in my life. Rain spattered my visor, but it was difficult to tell if the track was wet or if the tyres were merely still not fully up to temperature. I started to press the throttle hard between corners, stabbing the Toyota through the gears. Each upchange felt like a kick in the small in the back – no surprise as the halt for a millisecond knocks about 1g of deceleration into the car. That, of course, is a measure of its acceleration.

I began to live with the vibration in the cockpit. The Toyota was sitting on its bump rubbers above about 250km/h (155mph) – and the sensation was of a car with no suspension. I asked a couple of regular F1 drivers about this later, but all of them said they were unaware of this feeling. This is probably because they spend most of their days driving cars with about half a centimetre of suspension travel.

I did 14 laps. By the end, I was hitting seventh gear on the back straight – about 270km/h (168mph). Into turn one, on my last flying lap, I braked hard just inside the 200-metre board. The feeling that followed was gorgeous. The car seemed to be sucked down to the apex of the corner without drama. By the time I was in second, and travelling at about my right cornering speed, the apex was still about 30 metres ahead of me.

I awoke the next morning with marks on my shoulders and hips. I was battered and bruised. The pain, though, was exquisite.

Thank you to everyone at Toyota Motorsport for giving me not only the most memorable 60 minutes of my racing life, but also the chance to touch – ever so slightly – the world that for so long had remained an impossible dream.

Click HERE to go back to the beginning of Peter's Story...
Posted by Egypt Conflict at 11:47 AM