Doing something memorable: Peter Windsor samples a TF104B...Part One 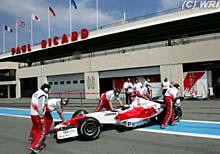 Formula 1 journalist Peter Windsor always wanted to be a Grand Prix driver, so when Toyota offered him the chance to fulfil a life-long ambition, there was no hesitation.

I always wanted to be a racing driver, of course; we all did. I grew up in Sydney, Australia, at a time when the Formula 1 stars competed in an eight-race European winter championship, called the Tasman Series. Grand prix aces of the day Jim Clark, Jackie Stewart and Bruce McLaren were my immediate and future field of perception. I wanted to do what they were doing. The Beatles were merely background music.

In 1966, I rang Qantas to see when a Mr J Clark might be arriving in Sydney from Auckland; airlines in those days were allowed to talk about such things. My dad drove me to Mascot Airport.

I stood there, awestruck, as Jim, in grey trousers and red-and-white checked shirt, walked into the arrivals lounge. He shook hands with someone and walked outside. By the kerb was parked a mauve Toyota Corolla. He unlocked the door, climbed in, waved goodbye and drove away.

I have loved Toyota Corollas ever since.

A few years later, by which time it had become very clear that I was never going to be a racing driver, I nonetheless found myself in the fortunate position of occasionally being invited to race saloons and sportscars. I was writing about the world of F1, I was working with a couple of drivers and now I could race from time to time. I had the world's second-best job.

Still do – as I was reminded not so long ago by Matt Bishop, my editor at F1 Racing, when he rang to ask if I would like to try a Toyota F1 car. I suggested that he stop kidding around and move on to the real reason for the call.

"No, I'm serious," said Matt. "I've just had a meeting with Toyota in which we were kicking around a few ideas, and I threw in a suggestion that you have a run in the TF104B. They thought about it for a second, and then said they thought it would be a good idea. Just giving you a heads up."

I had one of those tingling feelings. You know the ones; your blood runs cold and your pulse rate jumps. It's exam time back at school, or perhaps it's that police siren filling your head when you know you've just exceeded the speed limit. You are at the edge of your normal, sane existence. Out there, just over that invitingly low wall, lies the new world of the unknown. Go on. Take the jump. You won't fall. It's easy.

Yeah. Anyone can do it. The next few weeks passed in a blur of surrealism. Occasionally, I would catch myself saying something like, "Yes, that's right. I'm going to be driving the Toyota F1 car in a couple of days." Then, quickly, I would stop myself short. What if I couldn't drive it? What if I kept stalling the thing in the garage? What if I crashed it?

I tried to go through the motions, hoping that in some way it would reduce the size of the problem. I had a couple of meetings with the Toyota guys, asking about seat fittings and briefings, about car settings and tyres. I kept pinching myself to see if this was me they were suddenly talking about, if it really was me who would be the driver this day at the Paul Ricard Hi-Tech Test Track (HTTT), winter home of Toyota Motorsport GmbH.

Then, too quickly, the time was upon me. Plans for the seat fitting and other familiarisation had had to be shelved; everything would be finalised down at Ricard. Time would be tight, but there would be enough. No-one was going to let me out in the TF104B without at least some preparation; don't worry, Peter, it will be fine.

I flew to Nice and rented a car. Helmet and overalls by my side, I drove down to Bandol, the coastal village that used to be the hub of the French Grand Prix at Le Castellet. I checked into the Hotel Isle Russe, memories of Elf dinners and Tyrrell drivers round about me. Thirty-two years ago, I had stood outside this hotel lobby to watch Jackie Stewart and the other Elf pilotes attend a gala dinner. I had driven down to France in a 1.1-litre Ford Escort. I had slept in lay- bys and had camped at the circuit. The Isle Russe back then had shone brightly in the centre of the F1 galaxy.

Now it was my hotel, my place of rest prior to my driving a car far faster than anything that Stewart, or those other F1 greats Ronnie Peterson, Emerson Fittipaldi or Jody Scheckter ever dreamed about. I slept fitfully and arose early. Next morning, I drove up the old, winding road into the mountains – up to the Ricard HTTT.

The circuit is today a work of art. The old 'Paul Ricard' logo still sits atop the main pit complex; everything else is state-of-the-art – a five-star tribute to F1 test technology. There are no grandstands at the HTTT; instead, hundreds of metres of painted, manicured run- off area invite you to drive this circuit to its limit, and perhaps beyond. The place is immaculate – spotless in every detail. I felt like removing my shoes before I walked into the Toyota garage.

Former Toyota GP driver Olivier Panis kindly showed me the details of the track in a Land Cruiser. I had been driven around Ricard before – by Didier Pironi and by Nigel Mansell – so it was fairly familiar. A new chicane would be used on the back straight, but otherwise it would be more or less the same. I would be using the configuration – one of over 30 – on which they last raced the French GP.

I tried a basic seat shell, and it was fine. I tried the cockpit, and it, too, was comfortable. I would use Olivier's HANS collar and steering wheel. The pedals were exactly right. I felt as if I was sitting too low, and I worried about general visibility, but Jörg Faust, 'my' number one mechanic for the day, assured me that my height was about right.

Gianvito Amico, a Toyota test team engineer whom I remembered from his days with Minardi, spoke calmly into my radio: "OK Peter. We have about 30 minutes. It's quite cold – five degrees – so it may take a little time to heat up the brakes and tyres. Be careful. We have taped up the brake ducts, and we have given you quite a high traction control setting. When Jörg gives you the signal, switch on the ignition and then wait for us to start the engine."

The signal came. I flicked down the switch sited near my left thigh. A few seconds later, the V10 engine barked into life – a low rumble at first, and then, very quickly, a high-pitched scream that shakes the garage. The thought occurred that all this noise, all this vibration, was merely to enable me to travel unnaturally fast.

I remembered Olivier's instructions: "Just ease the hand clutch out gently. You won't need to give it any right foot. And remember to use the left-hand clutch paddle because you are going to be turning right out of the garage!"

The boys loosened the tyre warmers, and then lowered the car to the garage floor. Jörg raised his hand, foot on the nose of the car. Then, with a twirl of his hand, the tyre covers were whisked away, and suddenly he was stepping backwards out of the garage and waving me out, checking the pitlane for traffic.

Click HERE for the conclusion of Peter's Story...
Posted by Egypt Conflict at 11:20 AM