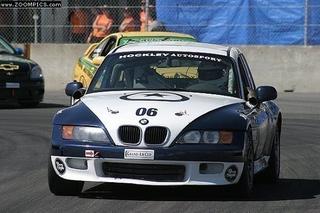 The team is pleased to announce the addition of Shawn Green to the line-up. Shawn, who raced with McMillin Motorsports in SPEED World Challenge in 2004, is also a founding member of the Black Racer's Alliance. Greene was a top rookie in Skip Barber, and has competed in numerous open and closed-wheel series over the past five years.

"Shawn brings a bunch of really good experience to our team for Mid Ohio, and beyond," said Ian McQuillan, Crew Chief for Compass360. "We've had a lot of success with our younger drivers this year and we're looking forward to introducing Shawn to our way of racing."

Green will join returning talents David Ciekiewicz (who finished 8th at Trois-Rivieres) and Billy Johnson (who had the team's #06 car in 2nd place at Barber, Alabama), as well as team owner Karl Thomson, who has a series of top-ten finishes over the past two seasons.

"We've had some great drivers with us this year," said McQuillan. "Our Mid Ohio line-up is one of the best, and we're looking forward to continuing our string of excellent results. Billy has really helped with set-up, while Dave's been great with tactical strategy. The combination of these four guys should be fun to watch."

Compass360/Racing is supported by advertising and design firm Compass360 (www.compass360.com), Hockley Autosport, Telecom consulting firm TEL IT
Posted by Egypt Conflict at 6:18 AM