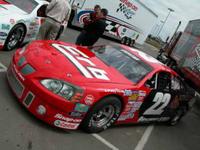 Despite struggling for much of the year Scott Steckly driver of the Erb Group/ ALTRUCK International Pontiac was looking to finish the CASCAR Super Series final two races strong, in an attempt to vault into the top-10 in the series point standings. This weekend’s race was at Cayuga Speedway, a 5/8 mile oval, the largest in Canada. It was a one-day event with practice, qualifying and the race all scheduled for Saturday September 10th. Scott and the #22 car struggled in practice posting only the 20th fastest time. Following practice the team borrowed a rear end from the #71 car driven by Bryan Cathcart. The rear end ratio change proved to help the car as in qualifying; Scott drove the Erb Group/ ALTRUCK car to the 13th fastest time.

The race was fairly short for Scott and the #22 team. Steckly remained in 13th from the drop of the green flag until lap 45, J.R. Fitzpatrick in the #84 was leading Scott, #33 Neil Fair and #11 Ron Van Es. The Milverton, ON driver gave J.R. Fitzpatrick a couple bumps in the corner but never could get by the #84. Neil Fair used the same technique on Scott and passed the #22 sending Steckly back a position into 14th. A couple laps later Scott’s race came to an end as the cars engine blew up. After the race a disappointed Steckly said “We have poor luck here at Cayuga, but this is getting ridiculous, we’ve run our old faithful motor most of the year. We need to get one more race out of it and then take a serious look at our motor program. Somehow we need to get the horsepower and reliability we had in the past”

The last race for the 2005 CASCAR Super Series goes next Sunday, September 18th at Kawartha Speedway located in Fraserville, ON.