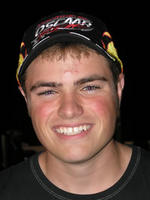 September 19, 2005 – Peter Shepherd Jr made his second straight start in the Mid America Motorsports Chevy and made the most of his opportunities in the final CASCAR Super Series event at Kawartha Speedway.

After disappointment last weekend Pete Shepherd was anxious to get back behind the wheel and give the Mid America Motorsports Chevy the finish they knew the car and team were capable of. That task began with a solid qualifying effort, rolling off 9th in the 250 lap main event.

Shepherd was able to run consistently in the top ten through the first half of the race. “The car felt really good, we got rid of those troubles we had last week and I just had fun out there” said the driver. The fun continued throughout the race.

Running a limited schedule of Super Series event Shepherd was no in the championship battle and gave those contenders plenty of racing room, but that didn’t stop the youngster from battling hard. “Peter Gibbons and I had a couple of stretches racing together and that was fun” said Shepherd. “We swapped positions back and forth a few times and you can really learn a lot from a guy like that who’s been around and won championships.”

Shepherd would finish the final event of the year in seventh position, on the lead lap and gaining two places from his starting spot on the grid. “I know Pete has some opportunities down south” said Mid America Motorsports President Dave Didero, “but anytime he’s available and I’ve got a car he’s welcome to drive it. His dad and I used to race against each other and we’ve talked a lot about doing something together, this was great for all of us and I hope we can do more of it.”

The CASCAR Super Series competes at historic oval tracks like Delaware Speedway, Cayuga Speedway along with the challenging road course at Mosport International Raceway and also on the temporary street circuit at the Toronto Molson Indy. For more information on Mid America Motorsports and the CASCAR Super series log onto www.cascar.ca and watch all of the races on Rogers Sportsnet.
Posted by Egypt Conflict at 1:42 PM