Would Someone Tell Rossi He’s Driving a Ferrari in 2007… 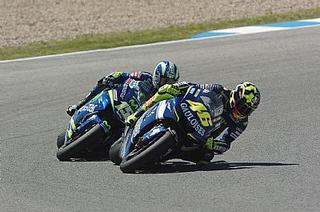 More from the ongoing will-he-or-won’t-he rumour that MotoGP King Valentino Rossi is headed to Ferrari to partner Mclaren star Kimi Raikkonen in 2007...

In an interview with Italian Newspaper Gazzetta dello Sport Rossi nixed rumours that he was heading for Formula One after his Yamaha MotoGP contract expires after the 2006 season. Rossi goes so far as to say that Ferrari tech boss Ross Brawn’s comments about a testing program already being in place for next year are categorically untrue.

Since the rumours began Rossi has maintained his MotoGP commitments would not allow him the time required to learn the complexities of driving a modern-day, state-of –the-art, Formula One machine.
"Let's suppose it's only six of them (Ferrari Tests): it would be almost a full time effort, and it would mean I decided to race in F1, which I haven't.

"If one day this happens, then I would only do it to try to win, and this requires a 100% effort, both mentally and time-wise."

"I heard Ross Brawn's words with a smile: maybe for programs regarding myself it would be nice if I too was informed about them.

"Instead I don't know anything about that and it's not in my plans."

"Everyone talks about me, without me being part of that environment, it's a really strange thing," he said.

Rossi even hits out at some Formula One luminaries for negative comments they have made to the press.

"And I also hear sharp, even nasty opinions about myself," he added.

"(Flavio) Briatore, (Giancarlo) Fisichella, and (Jarno) Trulli: maybe they are a bit envious of me, with a will to demonstrate that the F1 world and drivers are better than those of motorbikes.

"I think the opposite, but then again maybe they're afraid of me.

"By nature I can't think of what will happen in two years' time and start to get ready now. But it's clear that I have to do something, to find new challenges."

Don’t you just love good old fashioned trash talking? It's interesting that those most vocally against Rossi entering Formula One are the two Italian drivers, Fisichella and Trulli. Maybe they’re true colours aren’t Maranello red…They look awfully green when the subject of Rossi to Ferrari comes up.

Briatore just likes to add his two cents to everything though...There will be more on this one for sure.

For more Rossi stuff check out www.rossifiles.com.
Posted by Egypt Conflict at 11:24 AM